The second Cycle Highway Academy took place in London on the 4th and 5th of October after the successful first edition around “Planning’ in Arnhem in June during Velo-city 2017. 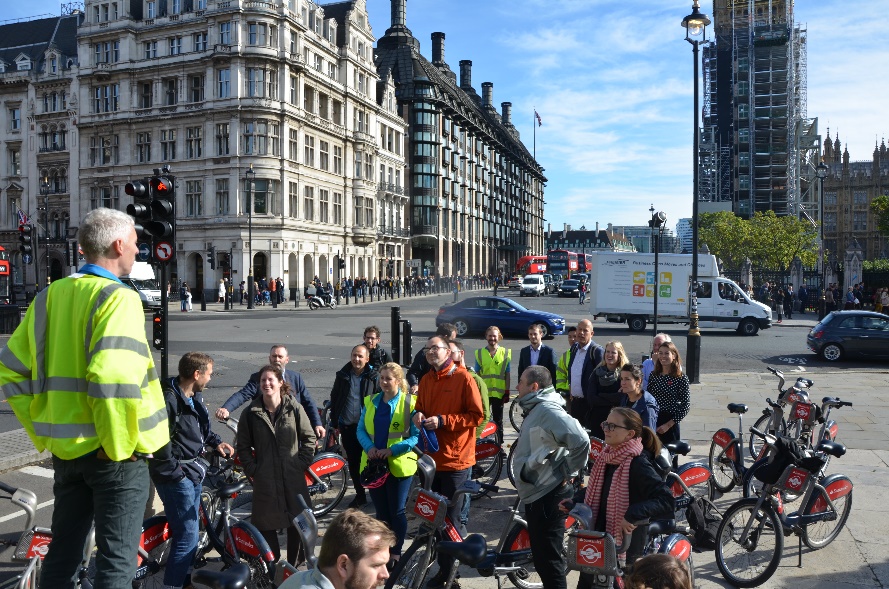 London is a rapidly growing city and because of this an enormous amount of construction works are ongoing in the city, which generates a lot of traffic, with a high amount of Heavy Goods Vehicles (HGV). Because of this Transport for London invests in protecting cyclists at roadworks and construction. Michael Barratt, Development Impact lead at Transport for London, shared his experience about dealing with construction site managers and how to convince them to think about cyclists’ safety during temporary construction sites. A variety of solutions such as segregation techniques (road markings, wands and protective funnels), HGV management and marshaling methods have been successfully applied in London.

Next, the Cycle Highway Academy participants were challenged to think about ways to say “this is (not) a cycle highway in a session led by Joris Van Damme from the Province of Flemish Brabant. Joris presented an overview of the CHIPS approach to make cycle highways more readable and attractive as a mobility product. He discussed the question whether it makes sense to brand a cycle highway that has not yet achieved  its full maturity and presented  the approach of readability in the CHIPS project. In the CHIPS project readability is defined as follows: “A cycle highway is ‘readable’ if a specified user at every moment and on every part of the cycle highway is capable to intuitively recognize and use the cycle highway with effectiveness, efficiency, and satisfaction. Well thought-out infrastructure and elaborated awareness raising elements focusing on identity and guidance offer the cyclist tools to help decision making before and during the journey.”  Joris discussed discussed different branding strategies and stressed the importance of branding on a higher scale (f.i. Flanders or on a lower scale: Londen and Copenhagen). The presentation ended with a first draft of CHIPS’ readability toolbox. This is a framework to structure, collect and generate new readability tools that can be used to improve the visibility and usability of a cycle highway. Some of these tools will be tested on the F3 cycle highway pilot between Leuven and Brussels. 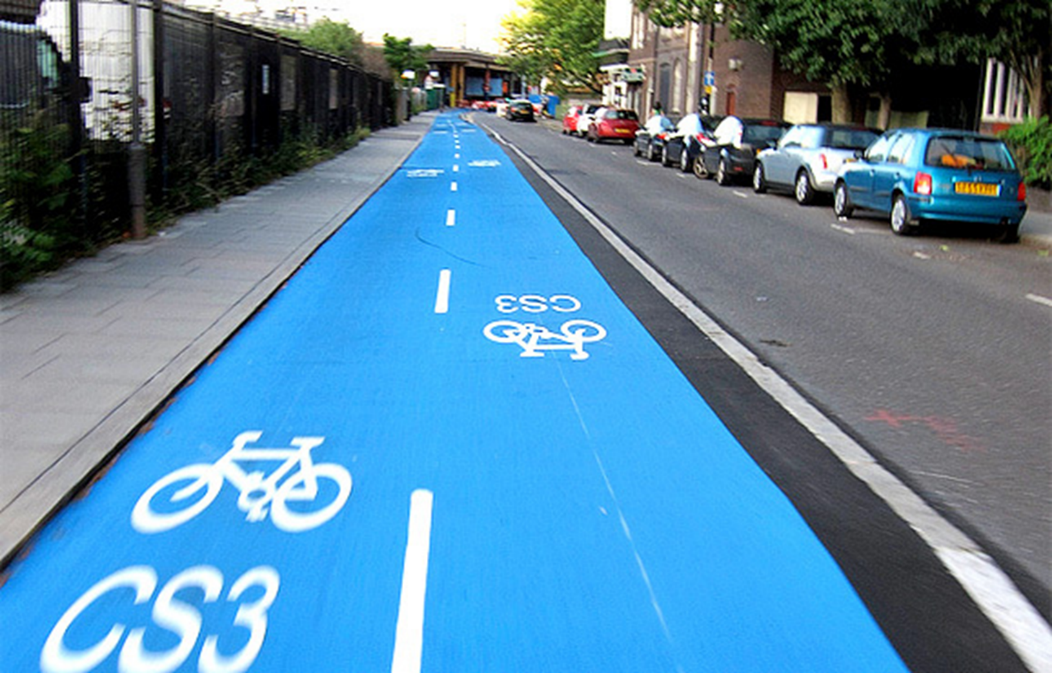 Another important topic to be tackled when we are designing and building a cycle highway is the integration with other modes of transport. Martijn te Lintelo, Frank Eggen and Babet Hendriks from the Province of Gelderland showed the participants in the next session how public transport has the potential to complete (or compete) with a cycle highway. By confronting the Cycle Highway Academy participants with two propositions, to which they had either to agree or disagree, they demonstrated the importance of governance and planning, the perspective of the planner and the user when thinking about linking cycle highways with public transport. You can do the test for yourself, do you agree or disagree with the following two propositions:

Also on the programme of this second Cycle Highway Academy was a cycling excursion along the cycle superhighway guided by Transport for London. During this excursion the Academy participants had the opportunity to experience the London cycle superhighway network themselves. Our guides from Transport for London pointed out critical points along the route, such as dangerous junctions, missing links and conflicts with other road users and explained how they were solved and what impact these solutions had on the London cyclists. The participants also experienced  the interesting readability tools on the newly launched mobility product of the quietways. These cycling excursions are now an important part of the Cycle Highway Academy programme.

After the cycling excursion and a networking lunch, Vincenzo Trevisan from Regionalverband Frankfurt Rhein Main introduced another important aspect when designing and building a cycle highway: considering the needs of commuters. The cycle highway in Frankfurt will connect the city center with the airport area of Frankfurt airport, which is a major employment pole in the region. In order to satisfy the needs of employees that cycle to work, a mobility hub will be installed at a strategic junction of different transport modes at Gateway gardens, a business park that is part of the airport site. Because mobility hubs for active transport are not yet widely available on the market, Regionalverband Frankfurt Rhein Main decided to cooperate with the “University of Applied Science Arts and Design City of Offenbach” (Product Designers) & the “University of Applied Science Frankfurt” (Architects) and challenge the students to develop a design for a mobility hub for cyclists, which will be installed in the near future. Cycle Highway Participants brainstormed about the potential functions a mobility hub could have to satisfy their users’ needs: e-bike rental station, charging facility, bike repair, user information panel, food and drink, … . 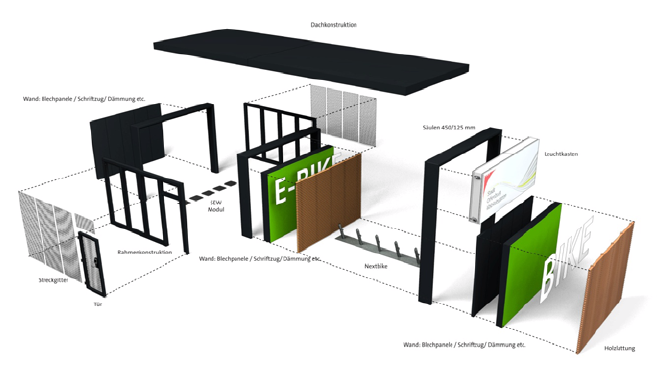 The Comber Greenway follows the alignment of the former County Down Railway, a direct route from Belfast City Centre to Comber and current improvement proposals in the urban section will strengthen this connection. As a cycling highway it delivers a direct route in and out of the City for commuters in the morning and evening five days a week. However, it was recognised from inception that this commuting use would only account for about 30% of usable time and that other user groups such as joggers, walkers and leisure cyclists would be encouraged to use the path. This means that the investment is fully utilised and enjoyed by a much wider community of active people. This shared use, however, brings with it its own challenges with potential conflicts between groups.  By talking with everyone a ‘One Path’ initiative has emerged that is a behavioural approach which involves an ethos of  ‘share, respect and enjoy’ the route. This has significantly reduced conflicts, in particular for commuting cyclists with other users. The other significant aspect of the Comber Greenway is the quality of the visual corridor which has a high level of biodiversity.  For all cyclists, both leisure and commuting, this provides a visually interesting and sensory cycling environment and experience. The concern is that we may potentially create cycle highways that are highly functional but which fail to provide an enjoyable, interesting experience.  Unlike a car journey cyclists can experience detail at a human scale.  On a practical note trees and shrubs adjacent to the path can also create shelter. A carefully managed shared path with high levels of visual interest can deliver practical cycle highway objectives and provide a much better return on investment.  The clear message from this project is that the Comber Greenway is much more than a Cycling Highway providing an asset that has broad community involvement and use.

Finally a sneak preview was given into the programme of the next Cycle Highway Academy on February 28th and March 1st at Regionalverband Ruhr in Essen. The CHIPS partners are looking forward to welcome you there!