You are here: Home » MOBILITY ACTIONS » Actions in World » Electric cars to account for all new vehicle sales in Europe by 2035

Falling battery costs to drive sales but European carmakers will lose out to rivals in the US and Asia, forecasts Dutch bank 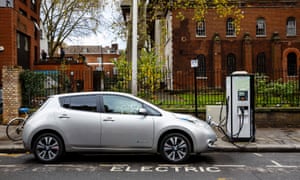 All new cars sold in Europe will be electric within less than two decades, driven by government support, falling battery costs and economies of scale, a Dutch bank has predicted.

However, ING warned that with battery-powered vehicles accounting for 100% of registrations in 2035 across the continent, European carmakers would lose out to their rivals in the US and Asia who already lead on battery production.

The forecast is much more aggressive than most other projections, such as the UK’s National Grid which on Thursday said it expects 90% of new cars in Britain to be electric by 2050.

France’s commitment last week to banning new petrol and diesel car sales by 2040 suggests it also thinks the roll-out of electric vehicles will be slower than ING’s report expects.

However, the bank said that it believed pure electric cars would “become the rational choice for motorists in Europe” sometime between 2017 and 2024, as their car showroom prices fall, their ranges increase and charging infrastructure becomes more widespread.

By 2035 all new cars sold in Europe could be electric

By 2024, the report’s authors forecast that in Germany the cost of ownership for an electric car – including buying and fuelling it – would be the same as a conventional petrol or diesel model.

The bank said the shift to electric will be underpinned by falling battery costs.

Motorists’ concerns over “range anxiety” will also evaporate in the 2020s, ING said, as the distance between charges goes from the 100-150 miles of most models today to 400 miles and above in the next decade.

Eventually, by the end of the next decade, carmakers will begin focusing solely on electric models, the report said. Swedish firm Volvo recently marked the beginning of this trend, saying it would only launch hybrid, plug-in hybrid or 100% electric cars from 2019.

ING expects battery-powered cars will beat hydrogen versions on both price and infrastructure. However, the bank said that European carmakers were likely to miss out in the coming electric revolution, because Asian and American competitors had the advantage in battery technology and electric motors. “Europe’s competitive advantage in internal combustion engine powertrains disappears with the shift to battery electric vehicles,” the report said.

Tony Seba, an economist at Stanford University in the US who has published research on the cars, said: “Our findings clearly indicate that essentially all vehicle miles travelled will be electric by 2040 [worldwide].

“The car industry faces an imminent technology disruption by AEVs [autonomous electric vehicles] in the early 2020s. Even without autonomous technology, the internal combustion engine car industry will have been long decimated by 2040.”

The flurry of electric car announcements last week, including Volvo’s electrification strategy, prompted a pushback by big oil and some analysts.

On Thursday, the IEA raised its forecast for global oil demand in 2017 to 98m barrels a day, with growth revised up 0.1mb/d on its projection last month, to 1.4mb/d.